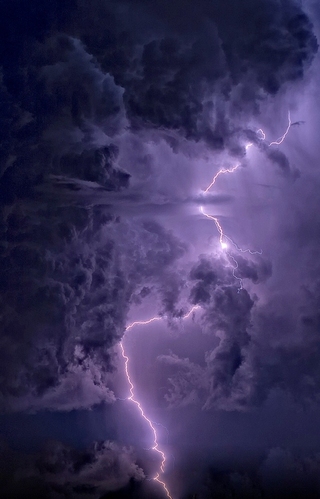 A holiday short story by Mark Zubro and illustrated by W.S. Reed

Mark Zubro is a prolific, award-winning author. With more than 32 books to his credit and at least one Lambda Literary award under his belt, he specializes in writing mysteries, at least two of which are popular gay series: The Tom & Scott Mysteries (a major league baseball pitcher and a schoolteacher); and The Paul Turner Mysteries (police detective and loving father of a handicapped son and an older teen who is athletic, but devoted to his brilliant brother), not to mention a slew of stand-alone books. His latest project is a series of three books, “Alien Dangers”, a wide and wonderful departure from all the other novels Mr. Zubro has published to date.

Fortunately for the reader, he brings his signature style to this, his first Sci-Fi opus. All of Mr. Zubro’s books combine beautiful writing, admirable and empathetic main characters, a slew of richly-developed and colorful secondary characters, a serious take on gay rights, an irreverent approach to gay organizations, and a richly-deserved condemnation of religious anti-gay bigotry. Though his characters and relationships are sexy, there’s virtually no explicit sex. Instead, it’s all about love and comfort, family, the safety and solace of beloved partners or husbands. It’s also about doing the right thing, even when it hurts.

And in the “Alien Dangers” series, it hurts a lot.

These three books trace the epic journeys and battles of Mike, a Chicago waiter, and his husband, Joe, a former cop from a galaxy far, far away.

In the first book, “Alien Quest”, Mike, living a very ordinary life in the Midwest, accidentally runs across a gorgeous man walking out of Lake Michigan, who turns out not to be a man, but rather, an intergalactic, alien cop named Joe. He needs help locating Vov, the fugitive he’s combing the universe for. He’s the greatest scientist in the galaxy, and he’s gone rogue. Joe doesn’t speak the language or know the territory, so he needs someone to teach him, virtually overnight. In fact, Joe sports some amazing talents – he has a built-in lie-detector, and the ability to learn languages almost overnight. On his planet, Hrrm, talents are given, not inherited or developed, by means of highly-advanced brain implants. In fact, that’s the problem: Vov developed many of those implants and the galaxy rightfully fears what terrible powers his new technology will bestow upon its recipients.

There’s a host of battles with Vov and the powers-that-be, anxious to arrest Mike and Joe for this whole “alien” thing they’re doing, and the death and destruction wrought by Vov in his radical experiments on human guinea pigs.

In a heart-pounding series of fights, battles and adventures, they manage to accomplish two things: they vanquish Vov, and they fall in love. In the process, Mike is almost killed. The only way for Joe to save him is to implant one of Vov’s new chips behind Mike’s ear. The result is way beyond anything either man expected, with Mike becoming incredibly powerful, the proud owner of an “aura”, a blue bubble of protection and power that deploys, automatically, when Mike is threatened or attacked. It’s a power that proves to be most valuable as they continue to battle cops from Hrrm, deep-space pirates and the anti-gay hordes.

In Book 2, “Alien Home”, the two men are spirited away across the universe to Joe’s home planet, as prisoners of the Ruling Council. Joe is stripped of his implants, but they can’t do the same to Mike, both because he’s human and because his implant is more powerful than anything they’ve ever seen before. Every time someone gets too close, his aura automatically deploys. No one can get close enough to harm Mike without risking his own life. As it turns out, though he’s a prisoner, he’s also now the most powerful being in the known Universe. He can’t be killed, and he can destroy mountains, cities, entire planets.

You’d think with their intergalactic travel, advanced culture, and technology light-years ahead of Earth’s, Hrrm and its neighboring galaxies would have advanced equally in forming a just and compassionate society. They haven’t. As Mike is fond of saying, “Apparently stupidity is universal”. Income inequality? At least on earth, our robber barons try to be subtle about it, but in this galaxy, money openly rules all. Political offices are awarded based on wealth. Nothing matters but wealth, and each faction would (and does) kill, cheat and lie to get more wealth and power.

Even worse, one of the wealthiest factions is the Religionists, who run ISIS-like governments on their home planets and hate LGBT people. There are billions of gays across the galaxies, and they are the thorn in the side of these people who use bigotry and fear to rule and get rich. They really want them all eliminated.

But the ruling council dare not try to exterminate Mike, who could, if he chose, just destroy them all. So they hold the LGBT people of the galaxies hostage, rounding them up by the millions and moving them to “relocation” camps. Any who resist (and there are many) are killed on the spot. This is good business for the religionists, because they get to confiscate all the assets of the gay people and their families, which puts billions upon billions into their coffers (sound familiar?). And it’s a good strategy for the Ruling Council, which holds the threat of the torture and death of more LGBT people over his head, as leverage to force his compliance.

To remove the threat that Mike poses, they sentence him and Joe to exile on a dead planet, a planet with no resources. Ostensibly, they are exiling them, but in reality they’re killing them, because the planet they’re headed for is just barely viable.

Book 3, “Alien Victory” sees Mike and Joe arriving on their prison planet, much of their supplies and equipment intentionally sabotaged, and only 100 gay men to initially populate their brave new world, and an unknown number of those are spies and saboteurs for the Ruling Council and the Religionists.

With Mike in charge, they set up a limited democracy, something none of the inhabitants had ever seen before. They organize their new home, cultivating hydroponic farms in the rivers that flow as a flood from the overwhelming storms that plague their home. They make their accommodations more friendly and comfortable, restore communications and electrical service, and achieve surprising progress despite the spies and saboteurs in their midst and the ruling council’s insistence on sending supplies they don’t need and refusing supplies and equipment they do.

I won’t give away the exciting plot of “Alien Victory”. It’s heart-pounding stuff with some horrible tragedies, a few triumphs and the endless burden on Mike and Joe of keeping everyone else alive, not to mention preparing the planet for the millions of prisoners scheduled to be relocated there. There’s breathtaking demonstrations of Mike’s power when a Pirate starship attacks, determined to kidnap Mike and control his power (he vaporizes the whole ship after an appropriate warning), a life-threatening trek through the mountains bedeviled with scorching days, hour after hour of lightning, endless deluges of torrential rain, hurricane-force winds, and sub-freezing blizzards after the sun sets.

But this is gay fantasy, so don’t worry. Mike engineers a major confrontation, but on an infinitely larger scale than Earth’s Stonewall. It’s brief, but decisive, and determines the futures of billions of people across the galaxies.

From my inexpert description, you might think this epic a cartoonish escape into fantasy. And you would be right, were Mr. Zubro not such an amazing writer. Joe and Mike’s love transcends galaxies (and species) and never fails to move. The sex is not explicit, but it is beautiful, because it’s the union of two hearts who no longer exist apart from one another. There are other brilliantly rendered characters, like the older Communications director, a seven-foot-tall screaming queen who once was a superstar of Death Ball, the occasionally fatal sport of the galaxy. There are very young teen hustlers, who get their first glimpse of what a real family and love between two men look like.

And you believe in the love that Mark Zubro shares with you in every interaction, every look, and every touch between these two powerful and beautiful men.

If you’re looking for something incredibly well-written, a Sci-Fi romance epic that delivers on every front: action, love, perfect villains and triumph, this is the series you need to read. Even if you’re not a Sci-Fi fan (and I’m not), you will likely fall in love with “Alien Dangers”. I did.

Warning – the three books are not written to stand alone – and they need to be read in sequence. That’s a lot of reading, more than 1000 pages, but well worth it, I promise.

Book two in the teenage mystery/romance series continues the adventures of Roger and Steve as they deal with friends who love and care for them and with enemies who wish to destroy and ruin all that they have. 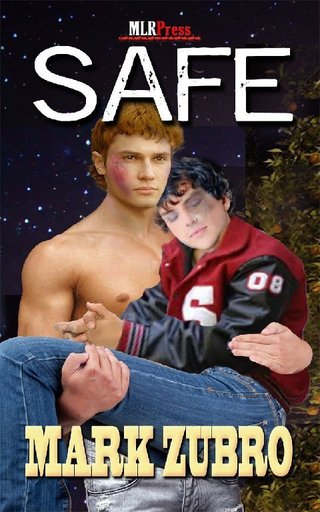 In a realistic gay young adult novel with believable gay teens who face danger and fall in love. Avoiding cliches and stereotypes about gay teens, the book shows a realistic view of what it can take in a world, while getting better for gay teens, can still be hostile in frightening ways. Roger Cook is in the middle of his senior year when Kyle Davis, the most picked on kid in his high school, commits suicide. Roger agrees to write an article on Kyle for the school newspaper. As he gathers information, Roger realizes the dead boy was gay and may have been murdered. Gay himself, Roger wants to find out the truth, but this leads him to danger and the possibility of love. Roger opens himself to even greater risk while trying to make those around him safe.

Brand new and just out. Twenty-three years in the making, from first word to print. Book one of a great gay science fiction epic. Set inChicago with a gay waiter who mets an alien from another planet. Through a series of wild adventures and near death experiences they track down an evil scientist. The Earthling waiter gives his heart to Joe, a broken down cop from outer space. Their love blossoms as their adventure hurtles from the streets of Chicago to a dramatic climax in the fields of downstate Illinois. 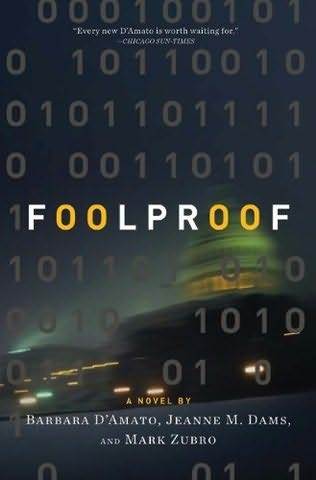 Foolproof will be available in mass market paperback October 29, 2013. It is a political thriller about stealing elections electronically written with mystery writers Barb D'Amato and Jeanne Dams.